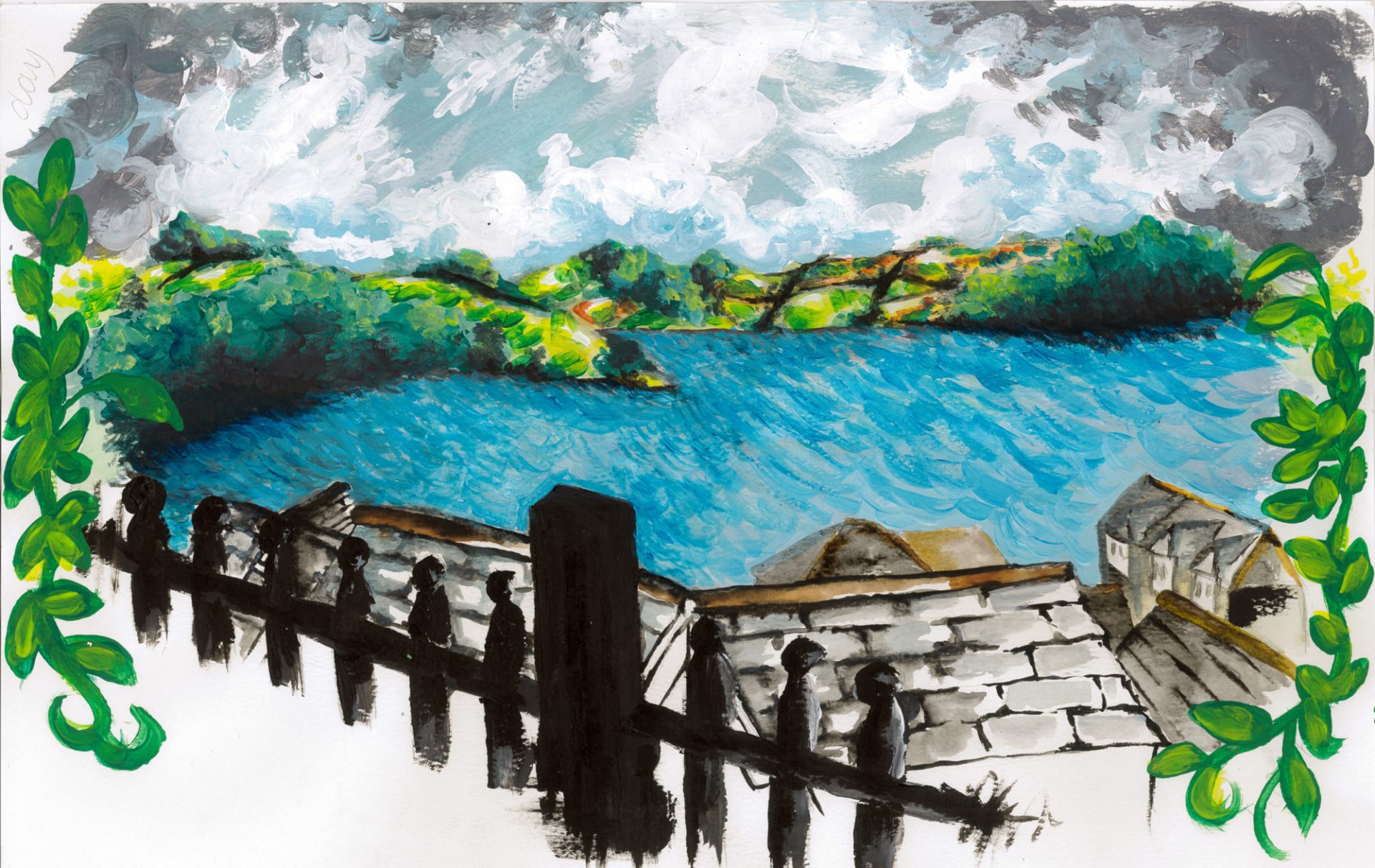 This week Boudicea Brian completed her work experience in the gallery. Bou is a young artist, interested in the Arts, History, Design and Technology, Computer Science. She helped with workshops and painted a landscape piece inspired by impressionist artists that she found whilst exploring the gallery’s collection.

On her penultimate day, Bou wrote a poem based on her previous outings on the walk from Flushing to Mylor, with a touch of fantasy. Before writing the poem Bou researched the chosen Artists. She ended the poem based on the artwork of Mathew Draper; his work is shown below.

Mathew Draper works in Edinburgh, and trained at Walsall College of Art and Falmouth College of Arts in the early 1990’s. His work centres around the purpose of creating an atmospheric and emotive landscape. Materials used are chalk pastel, which is how he establishes muffled lights and the ‘dragged’ reflections on the water top in his more urban work. Similarly, his style is also exhibited in his more rural imagery of woodlands, the coast and his towering mountain pieces through the approach of harsh, stormy clouds and ‘dusty’ rainfall.

John Doran’s work presents a digital approach and more modern take on paintings. Whilst maintaining the use of old-time mediums such as oil and acrylics, John Doran reflects his ‘digital approach’ through the act of streaks, dashes and marks. John Doran attempts to ‘coax the eye into believing the play of light on form, but then call it out and show that it’s just paint on a surface.’ Through this, John Doran creates an eventful atmosphere at his shows and practically breaks the fourth wall to his audience.

“I am interested in taking classical subjects of still life, portraiture and figures in landscape and articulating them through a digitally influenced and fragmented approach to painting.”

Adrian Ryan was born in London, and was the son of the portrait artist, Vivian D Ryan. Perhaps, he was influenced by her art style of landscape and portrait work. Adrian Ryan studied at Architectural Association from 1938-1939 and Slade School of Fine Art from 1939-1940. He then went on to teach at Goldsmiths College School of Art from 1948-1983. His art style of impressionism consists of strokes, brushes and marks to clearly establish his items of choice to paint in a simplistic, yet effective manner. In the still life painting Fruit On A Tablecloth, He uses quite bright colours, complementing red and oranges with yellows and greens to highlight and contrast the apples; he also uses light and pastel blues and greys to create shadows. 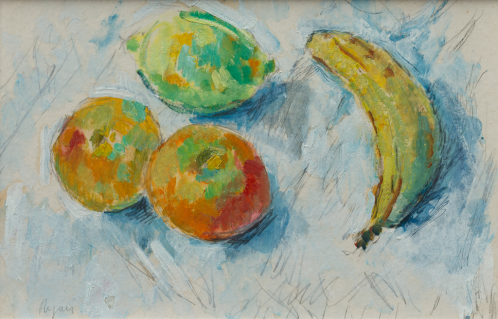 John Arnesby Brown was best known for his impressionistic depictions of pastoral landscapes, often featuring cattle. He studied at the Nottingham School Of Art in the late 1890s, and the Bushey School Of Art in London, from 1889 for four years. His artwork used the typical colours for the scenery he painted. His clouds are very poignant and prevalent in the painting A Summer Day, and in his other artworks. 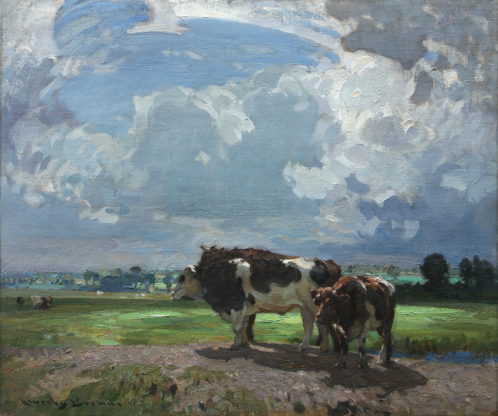 Born in Camberley, Surrey, Charles Simpson was majoritively self-taught, with the exception of his studies at Bushy in 1904, under a horse painter, Lucy Kemp-Welch. He moved to Cornwall throughout his life. His impressionist artwork involves using a range of saturation in his colours. He approaches the painting Sunny Bank – ducks feeding with different brush stroke techniques and utilises the water to add reflections and shadows. This creates a sense of realism and an illusion to those looking at the artwork.

At the beginning of her project, Bou decided on creating her landscape piece based on the view up the hill from the gallery, looking over the harbour. Bou took a range of photos and spent some time going through the gallery’s collection, researched above, to build on her painting techniques and to develop her skills. Here are some of the photos she took:

Bou took these photos of the gallery collection and the most recent Hevva! Hevva! exhibition to help guide her final painting.

Throughout the week, Bou has developed her artwork. She used mediums such as water colours and acrylics and approached the piece with the art form of impressionism.

The cows of Mylor are some strange, mind….

The sun drew out its hidden heat,

‘Twards some dreary clouds it ‘gon tried ‘a beat, mind,

In doing so the heat did come,

The cows did’n lay down no more, see,

Below in th’arbour blossomed and bloomed: a parade!

A dozen ears all perked up at once,

Whatta strange sight so see, as a lad such’a’me!

In the glint of the sun, the cows became airborne,

Those cows of Mylor are some strange, mind…

They flew over the fields of grass and wheat,

And passing their neighbours, the Mylor sheep,

Well, I’d say they gave ‘em a sneery wave, they did,

And they giggled at the fact that the sheep were due their shave,

Then, so they don’ gedda wound up and cause a kerfuffle…

…the cows continued swiftly on.

They reached the harbour at around midday; ‘Oh look at that! Flying cows!’ – one man did say,

T’was ‘round about then that them cows did ’av enough,

All their limbs, indeed, became numb; some of their stomachs did gurgle and churn,

T’was about time they ‘gon an’ stop again.

The cow at the front arched his body to the ground; soon they all dove down,

Of course Philps was the place to go!

They then decided on taking a ride in the boats, out onto the cerulean blue ripples,

Them cows of Mylor are some strange, mind…

The captain split them up into separate boats,

…As the amber sun pierced through the blue of the sky; the clouds appeared warped, like technicolour tie-dye.

Once ‘tall was set an’ gone, ‘an after the sun no longer shone,

On all the cows did darkness spread, without a hint of dread,

‘An with only the love of the brilliant sight, of them Falmouth harbour lights at night.

The glory of their golden hue, reigned supreme from the cows view,

And the next morning the farmer would be left bemused,

As to where them cows did go,

And it was sure to make the news,

Them cows of Mylor are some strange, mind…

An insight into the poem

The poem above was written with the intention that every other line, or thereabouts, would have a Cornish accent and character that would contrast the other lines – which are in standard english. This was thought to bring a’bidda Cornwall into the poem. The poem describes the journey of the ’Mylor cows’ that are often free to wander about along a walk from Flushing to Mylor. The hint of supernatural supplies an element of fantasy and folklore into the poem when the cows are said to have flown to falmouth harbour.