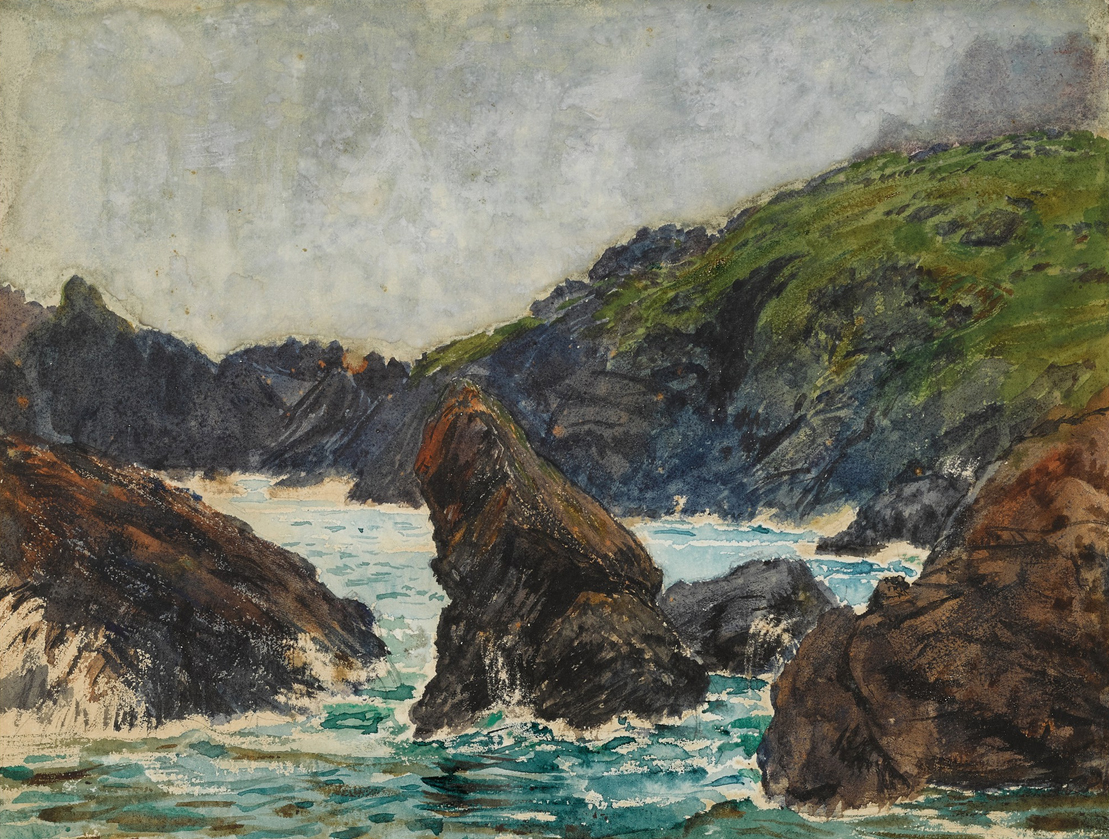 William Holman Hunt was one of the founding figures of the Pre-Raphaelite Brotherhood, a group of artists formed in 1848 that sought to champion imaginative scenes inspired by literature, religion, nature, and poetry.

While the brotherhood was short-lived (some five years), Hunt remained committed to its principles throughout his career. He was a devout Christian well-known for his incredible attention to detail and religious subject matter. His most renowned paintings are The Awakening Conscience (1853) and The Light of the World (1853).

This work is one of a few known watercolours by Holman Hunt on his walking tour of Cornwall in September 1860. The other works, Asparagus Island and The Cornish Coast are in private collections. There is also Helston, Cornwall in the Whitworth Collection.

Holman Hunt was visiting Cornwall with his friends Valentine Cameron Prinsep, Francis Palgrave and Alfred Lord Tennyson, who were completing Tennyson’s second walking tour of Cornwall to retrace King Arthur’s footsteps. This epic trip was made just after Holman Hunt and Tennyson had worked together on Tennyson’s Poems published in 1857. They had a tumultuous working relationship, and Tennyson did not appreciate Holman Hunt’s interpretation of his beloved Lady of Shalott.

The King Arthur legend is synonymous with Cornwall, which has approximately 35 archaeological sites and relics of significance. Falmouth Art Gallery’s forthcoming touring exhibition, The Legend of King Arthur-A Pre-Raphaelite Love Story, will explore this topic whilst touring the UK to locations associated with the Legend.

‘On 17 September we were at Lizard point, where we found H. Hunt, and Mr V. Prinsep with him, visiting Kynance Cove, which almost seemed to us like a Turner landscape in actual presence, so rich and so varied is the colouring of the serpentine bastions’ (Palgrave’s journal, Tennyson Research Centre, Lincoln).

On that trip, Hunt painted one of his most excellent watercolours, Asparagus Island (Christie’s, London, 24 November 2004, lot 1).

This watercolour also details Holman Hunt’s continued study of the English Coast after his 1852 oil painting Our English Coasts, which resides at Tate. In Holman Hunt’s Catalogue Raisonne, Dr Judith Bronkhurst praises Hunt’s ability to convey the landscape in watercolour; she writes, ‘Hunt deftly describes the overcast scene with great economy of means, leaving the paper bare to indicate the foam breaking against the base of the rocks.’

By emily
0 Comments
0
previous next
X