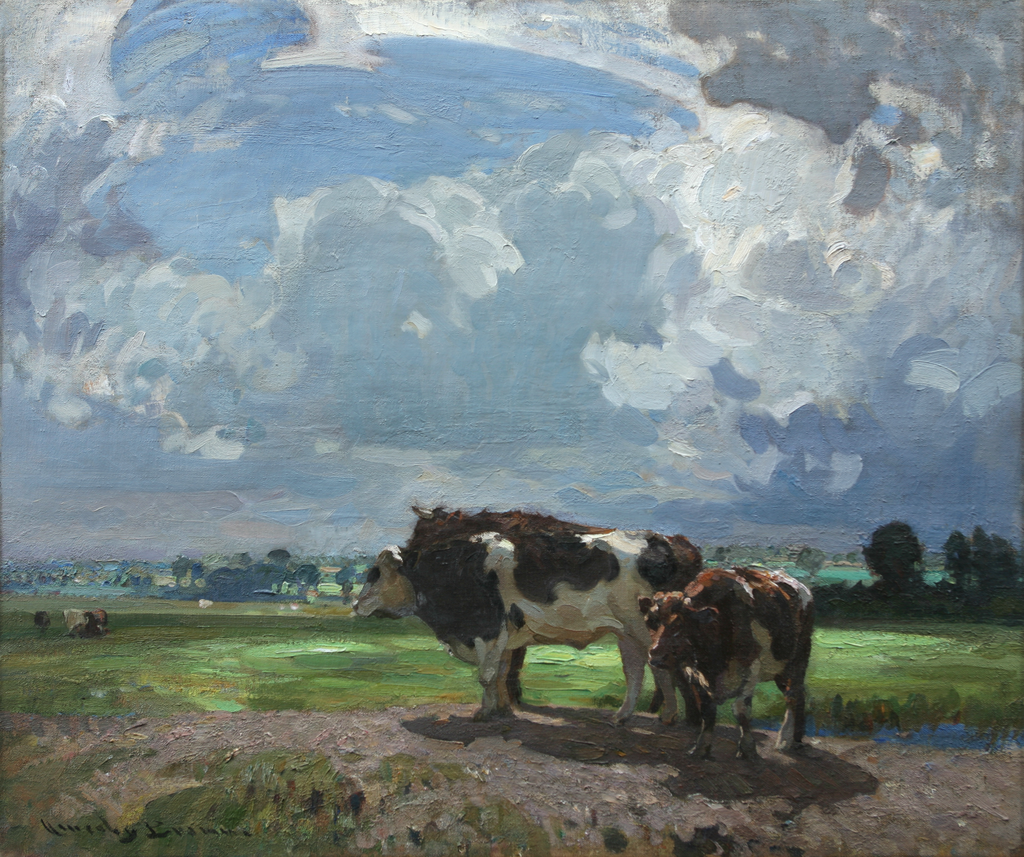 Sir John Alfred Anersby Brown was an English painter born in 1866 to a well known family in Nottingham . He attended the Nottingham School of Art and went on to be tutored by Andrew McCallum where he learnt to love painting outdoors, he then went on to study in London as well as exhibit his painting at the Royal Academy. Not long after that a friend invited him to Geldeston where he first began painting the English countryside. He loved it there so much he rented a room in the White House, Haddiscoe, which he would eventually live in for many years to come. In 1896 he married his wife, Mia Brown, a portraitist of children who lived with him in the White House until her death in 1931. John and Mia Brown spent half the year in Norfolk, at their home, and half in London, however he spent a few winters in Cornwall working alongside St Ives painters, Adrian Stokes and Stanhope Forbes. Unlike most artists based in Cornwall, he did not paint the sea but instead stayed committed to the theme of pastoral landscapes. He often painted cattle and horses, as seen in A Summer Day. As in many of his landscape paintings, A Summer Day has a bold sky with deep shadows and bright blues which, similar to most of his works, is the more dominant part of the painting. The painting has two black and white cows in the foreground which stand out against the blue skies and green fields. The painting is very tranquil and he has perfectly captured the feeling of summer and the English countryside. He died in the White House at the age of 90 after fully losing his sight. Sir John Arnesby Brown has been referred to as “the artist Nottingham forgot” due to the lack of recognition in Nottingham despite him growing up and being educated as an artist there.

This post is part of Young Curators series. Polly spent a week at the gallery experiencing what its like working in an art gallery as part of the team. This included supporting the baby jam and our school group visits. This post is the outcome of discussing with staff. Researching and interpreting the collection. Uploading and editing on our website. It also feature in our new App as an audio description, recorded by Polly. Thank you for your help this week Polly.

By frontdesk
0
previous next
X