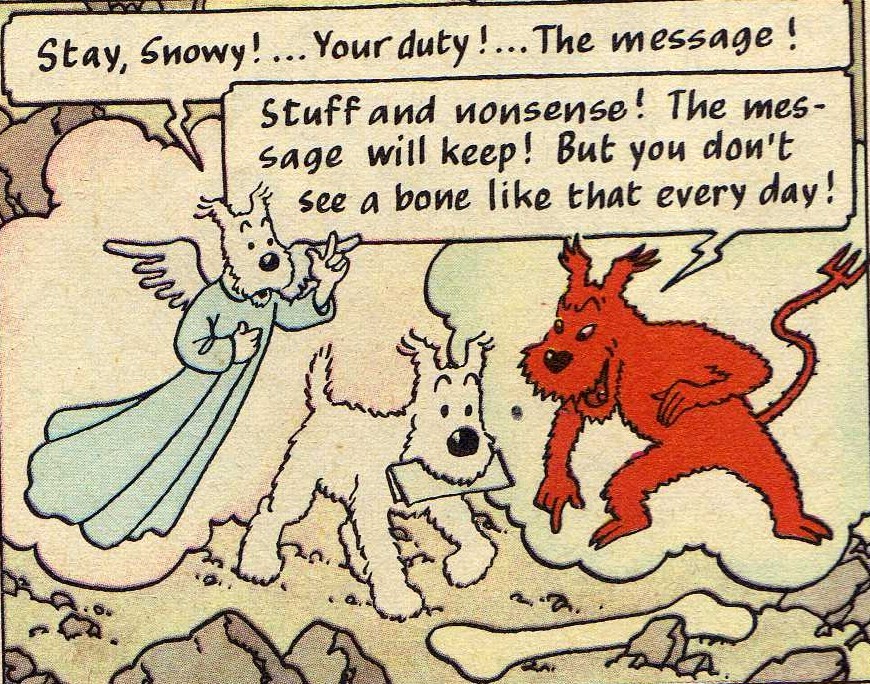 This picture has been pinned on the wall in my ‘home’ office for the last fifteen years. If I am in a quandary about something, it reminds me to weigh up the pros and cons. It is the penultimate frame on page 45 of my copy of Tintin in Tibet. It shows Snowy (originally Milou in French) Tintin’s valiant sidekick, wrestling with his conscience as he carries an urgent SOS note but stumbles on a huge bone which he describes to himself as ‘a five-star model!’. Only seven frames before we have seen Tintin sprawled, helplessly unconscious, as a huge horned Yak bends over him and starts to eat the yellow scarf around his neck and nearly strangles him.

This rapid turn of events, the heightened graphic action and tug on the heart strings is typical of a scene from Hergés Adventures of Tintin. Hergé himself said that Tintin was aimed at “all young people from seven to seventy-seven” and it is this universal appeal that transcends fashion, age and nationality. I expect that I got my first Tintin adventure book in the mid-‘60s probably using Christmas/Birthday book tokens. I was keen on collecting things and particularly keen on collecting series of books (and still am) I also took a librarian’s pride in arranging them. My Tintin series is very weary and worn. Each one, dating from that time, has a grubby hand-numbered sticker, half an inch in diameter, at the top right hand of each front cover. It is not clear to me now whether the numbering follows the order that I acquired them but No.1 is King Ottokar’s Sceptre, No.10 Tintin in Tibet and No.13 The Castafiore Emerald. Not alphabetical then, and not by purchase order either because a bit of sleuthing show me that the former was ‘8s 6d net in the UK only’ as was the latter but Tintin in Tibet was 9s 6d net (nothing about the UK – and for those of you who aren’t old enough to remember s&d were shillings and pence or ‘old money’).

Little things please little minds and I remember thinking it really neat that Hergé is the sound of the letters RG when pronounced in French which Georges Remi, or on a roll-call Remi, Georges adopted as his pen name aged seventeen. What also appealed to me was the legibility and authenticity of the pared down graphics – townscape, aeroplane, chateau, motorbike. I learned that Hergé collected an enormous photographic archive but that he also worked with a team of graphic artists.

This graphic simplification coupled with the cinematic perspective of stop-frame cartoon strip accentuates how we experience the characters. Thus, Tintin who, throughout more than forty years and twenty two books, almost always wears a blue jumper, white collar and brown plus-fours and his great friend, Captain Haddock is always recognisable by his black beard, nautical cap and jacket and ever present pipe and whisky bottle, the butt of so many of the practical jokes, puns and comedy. In fact, if a character is not wearing his customary outfit you are aware subliminally that you must pay attention to the action.

The boy reporter, Tintin, first appeared in comic strip form in Le Petit Vingtième on January 10th, 1929 but it was not until 1958 that Tintin found recognition this side of the Channel thanks to English translators Michael Turner and Leslie Lonsdale Cooper. Turner wrote: “we would go through the text and repeat it out loud, and it was then that quite a number of the names were coined, as well as things like Captain Haddock’s foul language.” Particular favourites of mine are Haddock’s ‘billions of blue blistering barnacles’ and ‘thundering typhoons’ and I’m afraid I still use Tintin’s ‘Great snakes’. Alliteration was of course fun to read aloud, and Thomson and Thompson (Dupont and Dupond in French) chronic spoonerisms are a running gag ‘mum’s the word, you know’ and in next frame ‘yes, dumb’s the word, that’s our motto’. There are also lots ofphonetic gags like Ivan Ivanovitch Sakharine.

New Zealand film-maker and fellow Tintinophile, Peter Jackson, in an interview in a Le Monde special supplement in December 2009, says that as a child he thought Tintin was in fact English because all the frames had been redesigned even the Belgian policemen has been transformed into English bobbies. Whereas Steven Speilberg in the United States only heard of Tintin in 1981 when reading a review of his film Raiders of the Lost Ark where Harrison Ford’s character was compared to Tintin. Jackson and Spielberg collaborated to make The Adventures of Tintin: The Secret of the Unicorn, a  3D computer-animated action-adventure film which came out in 2011.

I cannot number the times that I have read these books, or for that matter the number of times my son has. They are cherished old friends, they always give me pleasure and every time I read them I notice something new. They will no doubt go to my grandchildren who, being bilingual from birth may be able to squeeze even more pleasure out of them.

Several Tin Tin adventures are available within the Cornwall Council Library system . You can choose between a great selection of comic books or opt for Steven Spielberg’s cinematic version in dvd.

Books for Thought is a series of posts inspired by books. Readings suggestions, personal thoughts and sometimes simple activities to do to reflect on a theme from the story or topic in the book.

By Sara
0 Comments
0
previous next
X